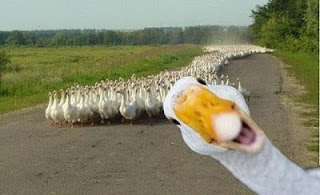 I won a baby duckling at the Arizona State Fair.  I threw a nickel high into the air, it bounced and landed in a little shallow pan.  My brother and his friend, Chris, shouted, she won!  Hey, she won a duck! I was handed a cute little yellow ball of fluff that I named Kim. Back up about 3 minutes before the winning coin toss. I was having a moment of frustration, or a 5 year old temper tantrum. Everyone was throwing nickels trying to win a baby duck, but, I was too small. I could not see over the railing.  It was like I was invisible and powerless to enlist the help needed.  When they handed me a nickel, I tossed it in a wild, devil may care way and won. I can't imagine how many things that nickel hit and bounced off of on its trajectory. That seems to be true with most of my lucky breaks.  If I am detached from the desired outcome, I am sure to get my wish. My brother dug a pond for Kim the whole family enjoy many funny moments with Kim. I had a wonderful experience and I loved her so much. I thought Kim was a girl duck. My parents loved him too but took him to Encanto Park to be with other ducks once he was fully grown.  The mystery is how did I discover Kim was a male?  That is yet to come.

(sorry about the font change)
Kim was one of many pets and animals that I would take care of over the years.  I was given an old horse one summer at camp.  This horse was having some hip problems and he hurt.  We were always lagging behind everyone on the trail at camp.  I would get upset when he wouldn’t obey my commands.  One day the trail leader said you have to show him whose boss.  I was sort of mean that day digging my heals in his side.  After a long day of riding I got off of him and just looked at him in the eyes and he had so much love in his face.  We spoke to each other in whispers and nozzles and hugs.  I could see that he was just old and tired and yet he had such resiliency.  After that I was patient and kinder and we did just fine.  He would go a little bit faster once in a while and catch up to everyone.  I hated to say good bye at the summer’s end there was such unconditional love within this horse.  I got equine therapy free of charge and it really did help too.
My Dad and Mom would not let me have a cat for many years due to my asthma attacks. Sometimes interactions would be with other’s animals would result in rashes.  Finally Zac found a little cat in the snow.  It was so tiny and I said, OK let’s take it home.  That started the rescuing of cats part of our life.  I had to take antihistamines to cope.  Over time my body got used to cat dander and I am alright now.  We could not always keep them but we had them until we found a good home for them. That is why we have Smoky.  He was beat up and I took him to the vet.  He got patched up.  The vet said, “This one is feral”.  Well he adopted us and when we were packing to leave he jumped in the car with us.  Most cats complain and meow when ridding in a car.  Smoky is a great travel cat and probably could go on the road with us.   There were birds we rescued as well.  We learned how to feed a lost ferret until the owner found him.  I am proud of the many creatures we managed to help and find homes for over the years.

I love animals and feel they do communicate with us.  I never expected anything in the way of reward for helping and rescuing animals.  I had to abandon two cats once and felt awful.  We took them to a very nice neighborhood and let them go.  That is not the usual track I take but we had an unusual situation at that time.  The best place is always a no kill shelter if you can find one.
The animals say thank you

One night I had a wonderful dream.  Kim, my duck, waddled up to me and said, “Hello”.   He spoke to me and he was dressed up in a scarf and vest but looked especially dapper in his Scottish Tam.   He introduced me to his many ducklings.  Kim had a wife and they had many seasons of ducklings.  I only saw about 20 present.  They all greeted me with such affection.  Then Kim said, “Come this way, Nancy” and I followed.  I walked into a barn where to my surprise were all the animals I had ever helped.  There were some birds flying around as well.  I noticed the old horse and several dogs, and cats and they were all smiling in their own way.  As if on cue, they all said, “Hello, Nancy, we love you”. It was so adorable how slowly and deliberately they formed those words with squawks, squeaks, guttural sounds, and a little baying.  It reminds me of the Christmas song my classroom of first graders sang in Spanish.  We had to do it many times and very slowly to pronounce it right. My heart just swelled with appreciation.  Dreams come with many feelings as well.  The feeling I had was that all those little interactions we take for granted do add up and the animal kingdom is receptive and perhaps blessed.  All life is sacred.  I am not a vegetarian but more and more I shun meat and I never eat duck.  We go out for Chinese food once in a while and it is on the menu but to this day, I can never have it.
The moral if there is one:  No act of kindness goes unnoticed in the larger eyes of the All That Is.  Let it come from the heart where every good and perfect gift comes from.

Posted by Nancy's Silver-lining at 2:51 PM