Did I have a past life as Saint Francis? 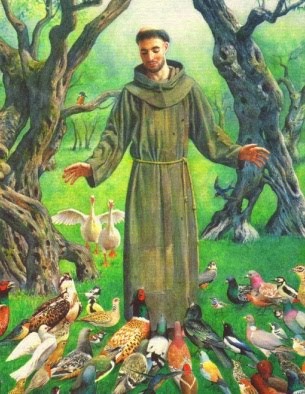 I know that most people want to be someone significant when it comes to past lives. There are millions claiming to be Cleopatra, as one example. In truth we have been many things: Pauper, King, female, male, priest priestess. We have had life times on other planets too. In one past life reading, I discovered someone had been a mer-person (mer-maid or mer-man). Did I live a past life time as Saint Francis of Assisi? And if so, what would I do with such amazing information now? If... I was like him, I might be unable to say I was him. I don't feel those similarities. If I had been Saint Francis, wouldn't this life time be better? As my son said, I don't think you would have to come back...you graduated. You would be an ascended master. Does that mean that I would have to sit on a fluffy cloud and play a harp? What if I wanted another chance to live and express in a different way and in a different time? Another chance to be a renegade and this time as a female dynamo? Wild and crazy as it seems. Maybe it is truth.

It really isn't that strange to think there is a connection.  Let me say that my soul has always been a renegade. Regardless of the life time and personality; Freedom was always more important than money, position or power. Then I did have a life time as a gorgeous social climber in London they say. No I was not Lilly Langtree. My name was Margo. There are a chain of life times that lead up to the Assisi life.

It does explain my resiliency. I honestly don't think another soul could have lived this life of mine and not been on the other side by now. I almost exited this world at age 4 when I developed pneumonia. My childhood was quite challenging for me.

What has happened in this lifetime to tell me this is true?  My parents were not religious. We celebrated Christmas without much emphasis on the Birth of Jesus story.  They had protestant backgrounds.  My father being a doctor was scientifically focused most of the time. Both parents had very unusually high standards for us children and unusually difficult disciplines. Clearly at age 4 I had the right idea...¨lets blow this Popsicle stand¨.  I am sure they were trying shape me and my brothers into some sort of perfection...by their standards. Sadly it had the opposite effect on me.  I started doing poorly in school.  I remained many days under my bed hiding and talking to my blue stuffed rabbit, Tony.

I have written about Tony before. Tony was the wisest of rabbits. He was able to love me. guide me. and encourage me to go on. Thank God for whatever spirit entity Tony was.  I survived childhood. I tried to protect my younger brother Bruce from the harshness I  experienced.  I was five years older. My little brother became addicted to heroine as a young adult.  My brother died of a drug overdose. I miss him. I will not blame my parents here, but I will say It was a very hard life for him.  My older brother is still living.  I will not discuss anything about him.

At age six I could talk to animals...and they would follow me home, wild ones and domesticated ones.  My older brother would throw rocks at them to chase them off.  I am unclear as to why this bothered him. He was indoors and I was outdoors. Before sleep, I had nightly teachers show up (in spirit). I was in training from a very young age. Finally I remember requesting they back off.  I just wanted to be a kid for a while.  It stopped for a while.  At age ten I was obsessed with the life of Saint Francis. My mother received a book from a book club she belonged to called ¨The Little Flowers of Saint Frances¨ .  I read it many times.  Then for the next year I checked out every book I could find at the library on the life of St. Francis. I totally related to his life story and what he was trying to do. This was an interesting obsession for such a young person who did not belong to a Catholic Family.  When I was 14 I told my mother that I wanted to convert to Catholicism and become nun.  My Mom chided me saying. ¨well if you want to be a nun, begin by obeying your parents.¨ It did not go over well with the significant members of my family. Was it a stage, an identity seeking stage. Perhaps. I am glad I did not do that again. I already have had some nuns lives as well.

When I was living on the Navajo Reservation, I was introduced to a psychic who did a past life reading.  She told me I had been the personality of St. Francis. When she said it, I lit up inside. She said I had also worked closely with the personality called William Shakespeare and might have been that person as well.  I feel that Shakespeare was an actor who in part became a producer/director and a conglomerate of famous writers of that golden era.  Several of us met in pubs to write parts of the now famous plays.  In fact I wondered if I was a female who contributed a slightly different perspective to certain parts of the written plays.  There was much mind melding going on with that group. That group was very inspired by unseen forces. In a sense you could say they channeled much of the information.  I would call it a soul group with a singular purpose to express and define the human condition in a way that had not been attempted before.

I did not entirely believe or accept this past life information at the time.  Now I wonder.

There are still some reasons I don't want to totally believe it. It feels weighty.  For years my guidance has been bringing me messages for others. Often they say do you know who you are yet? I always wanted to run from knowing. I think all of us are much more than we know. We would all run if we knew the gifts we hold.

Today I asked my guides, is it true, it is time to know. I got a yes, and now I am unsure again. I don't think it really matters at all.

aka ¨Angel Bell¨
Posted by Nancy's Silver-lining at 11:17 AM