My Kenya, My Expansion


This Side of Kenya 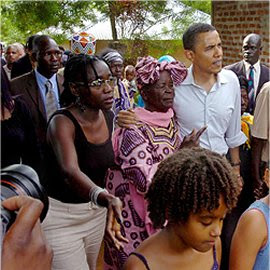 Obama with his Luo Grandmother in Kenya

This Side of Kenya
About a year ago I accepted a friendship request on Face Book from a man named Gordon Onyango from Kenya.  Kenya is of course where Obama’s father is from and Gordon has said this that Obama’s extended family lives close by in a neighboring town.  Gordon’s tribe is the Luo tribe and this is also the tribe of Obama’s family.   The Luo speak Dholuo and they not part of the dominant Massai tribe in that region. If Obama was campaigning in Kenya for presidency, he would not win there.  Political beliefs have more to do with tribal affiliation than ideals.  Gordon feels the Luo are marginalized by the Massai and other tribes.  There are cultural differences between tribes.  The Luo are largly a Christian Group and have taken on more of the English customs.  When we think of the English speaking countries, probably Kenya does not come to mind.  My blog is read mostly by those in the USA, Canada, the UK and Ireland and Australia.  I have a fare amount of readers in Croatia and Russia as well as France.  English is Gordon’s second language and he is fluent in it.  However he loves to read and speak Dholuo too.  For this reason I will translate what I just wrote.  However it is in Swahili.

When I realized how much outreach and charity Gordon was doing for his small village, I took a second look at this friendship.  He was asking for help, monetary help.  Sometimes that throws people off on a Face Book friendship.  Gordon remained friendly and sent some pictures of children who are orphans due to having parents with the HIV infection.  Aids is rampant in poor areas of Kenya.  Gordon’s group holds to Christian values or (other religions included) values that maintain fidelity in marriage.  There is some stigma in having aides or being an orphan due to aides.  If children do not wear shoes and the area they live in is unsanitary they get jiggers.  That is a very small flea that burrows into the soul of the foot and creates many bumps and sores.  People die from this infestation.  This is not to be confused with the mite that many in the USA call Chiggers.  Clean water and building wells is one of the first steps to eliminating many diseases such as: typhoid fever, amoebic dysentery, common dysentery, and diarrhea.  Another killer for small children is malaria. A parasite that is transferred from human to human via mosquitoes is the cause.  Mosquito nets at night are a great help.  Malnutrition and poverty make childhood very dangerous. Many children enter the labor market and marriage early for this reason. The WHO or World Health Organization has a Massai representative and that does not help the Luo very much.  If foreign aid is being sent, the Massai probably get the lion’s share.  That is why I believe that someone trusted in the Luo community is a better judge of how to distribute supplies and medication. What he asks for is meager but he knows what is needed.  His church will purchase medical supplies, rubber thongs, mosquito netting and seeds to grow corn which is ground into porridge.  Women do much of the gardening and have fresh salad material to eat in the good growing seasons.  They know what is needed much more than those who offer help overseas.
Gordon has become a teacher (ja pwonj ) for me regarding another world and culture.  Sometimes I would ignore him feeling I was too busy or did not have much in common with this person.  It does take some effort to cross cultural lines.  He remained positive and happy.  He would send me pictures of his Grandmother and his children.  I am sorry to say it took a while to build a positive relationship.  When Gordon’s grandmother passed away, I could see how hard that was for him.  She left him 4 acres and he is trying to build a medical clinic and dormitory for orphans.  I this point I did wire him a small amount of money.   That was too little to build a well and lay the foundation for what they hope to do.  Any way I started a “Go Fund Me” fundraiser.  I am trying to help built between those here in the USA and Kenya.  I would love to raise a bit more cash for Gordon’s small church.  Have you ever said, “I wish I could send my left over food to hungry or sick children?”  Actually you can through me.  Or if it is a significant donation you can contact Gordon who will explain how he receives Western Union money where he lives.  I am finding it hard to motivate people.  The economy has everyone being closed fisted, even for really good causes.  The best way to receive personal and community prosperity is to start having faith and start using resources wisely. I have been looking at my own budget to see where I could save and negotiate some of my own bills.  If all of my contacts on email and FACE BOOK could donate 5 dollars that would be $1,500.00 and that would be a small fortune for Gordon. Tithing is an important part of spirituality. I try and break my tithe into 2 or 3 causes. Gordon has become one of them. Neale Donald Walsch once said that, you must become the very essence of prosperity in your vibration.   Instead of saying, “oh I don’t have enough money to donate, it is much better to say, I believe in the abundance of the universe and I will find the resources to help.  Money is like breathing in and out.  There must be a flow and circulation to the process.  Eventually I think our money system will change and become more transparent.   When I give I really do see money flowing back to me.  It is law.  So once again, even if it is only 5 $ dollars, throw that out there and see what happens.  Free translation makes the world a smaller place.  What worries me is many of those free translators are disappearing lately Swahili is all I could find today.  I am going to try and learn the Luo language; Seems like it would prove my sincerity.